“A discordant adventure from when I went to school: somewhere in the fifth grade, the boys’ and girls’ handicraft classes were switched and girls were sent to the metal workshop to fold tin into dustpans. I was totally shocked by this forced action. As an advocate and enthusiastic busybody, I announced that this was a silly idea, girls don’t need this kind of a skill! The dispute was pointless, we still folded our small dustpans. And here I am now – from that point onwards, I chose to work with sheet metal. Instead of zinc sheet, it’s now silver sheet.”– Katrin Amos  at the A-gallery exhibition MEMORY CARDS (2019)

In the book “A-Gallery. Estonian art jewellery gallery for 20 years” (2014) Katrin Amos (b. 1953 in Tallinn) 1977 SAIE I appreciate minimalism and linearity in creation as well as human relationships – my element is a stripe, which enables to construct squares and cubes, also the planking of an old house is striped. Stripes as layers, stripes as rhythms. Time is most striped, sometimes being more colourful and sometimes grey. When using photos, my favourite elements are old architectural motives and details, especially wooden architecture. I spent my childhoon in a wooden house in Nõmme – that’s the source of nostalgy. In my creation I contracst self-shot “occasional” motives with strict geometry. We cannot do without colour, life is not black and white. 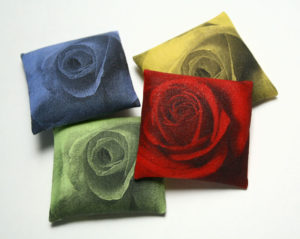 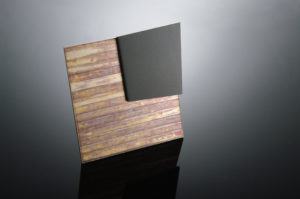 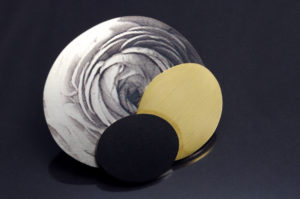