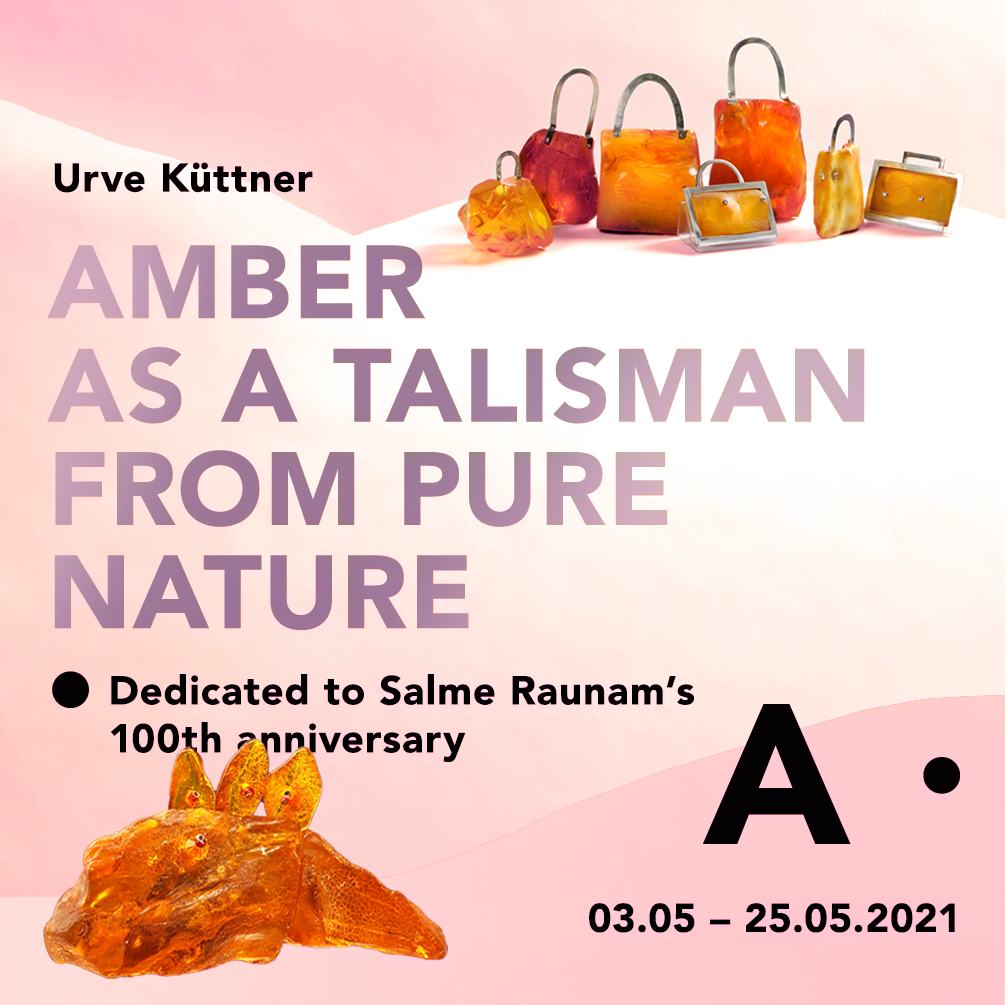 Urve Küttner. AMBER AS A TALISMAN FROM PURE NATURE in the VAULT.

On Monday, 3 May A-Gallery opens Urve Küttner’s solo exhibition AMBER AS A TALISMAN FROM PURE NATURE in the VAULT.

The exhibition is dedicated to Salme Raunam’s 100th anniversary.

This March marked the 100th anniversary of Salme Raunam, the grand old lady of Estonian metal art and the former professor of metalwork at the State Art Institute of the Estonian SSR. She was also my teacher and later on, a beloved colleague at the metal department. In the Soviet period, university teachers were required to conduct research. Thanks to professor Raunam’s suggestion I started working with amber and from 1979–1985 I researched Baltic amber and its uses. During the Soviet period, amber was not considered particularly valuable and the state’s attitude towards nature in general was careless and foul. It has been my mission to work with amber and reintroduce its historic value and meaning to the material. I was inspired by Lennart Meri’s book “Hõbevalge” (Silverwhite), where the author describes how the Roman emperor Nero’s obsession with amber prompted an amber boom in the ancient world – a small amber statue held the same value as a strong male slave. Until the 10th century, gold and amber were valued the same in Europe and Asia. In Prussia, the Teutonic order executed anyone, who gathered amber without permission and stealing amber also resulted in death penalty. In the Soviet Union, amber was cheap and widely available; it is worth noting that the Königsberg (currently Yantarny) amber quarry that was taken as spoils of war from Germany after World War II and restored by prisoners of war, is still fully functional and produces 90% of the world’s amber, determining prices on the world market. A contemporary amber boom was caused by Steven Spielberg’s film “Jurassic Park”, increasing amber’s popularity and causing a price surge.

The 50 million year old masterpiece of nature, the Baltic amber or succinite has embalming qualities, which means it is a great repository for insects, bits of plants as well as dinosaur remains and that makes it a perfect research material for scientists. Amber consists of over 40 different chemical and bioactive substances, the most significant of which is succinic acid that supports the immune system, has antioxidant properties and also helps muscle tissues to adapt to change and prevents blood clots. Together with a team of medics, the Latvian scientist Inga Ļašenko is researching the use of amber fibres in treatment of blood clots.

As a source of information amber truly is a wonder, however, it is also extremely sensitive to changes in its environment. Amber oxidises in sunlight, it melts and burns when heated and loses its beauty when boiled – it slips through our fingers like eternity it symbolises, when compared to human life span. Life on planet Earth can also be as delicate and fragile as amber, if environmental pollution, climate change and the spread of dangerous viruses is not stopped. Since ancient times people have valued amber as a natural healing and protecting stone, it was always held close. Amber is like a talisman, reminding us of the fragility of nature and the importance of a stable environment in sustaining life.

Today, more than 30 years after the Phosphorite War, an extensive environmental campaign in Estonia in the late 1980s against the Soviet industrial expansion, it is us, locals and not foreign powers, who plunder our forests and sacred trees. In the environmental awareness month of May I wish that the young and the old would once again form a unified front to protect Estonian nature, despite the individualist attitudes of today’s world.

Urve Küttner is a jewellery artist and designer, whose work spans a variety of fields, materials and techniques. Her work has often been determined by the technical possibilities available to the artist. As a designer at the Tallinn Jewellery Factory (1967–1976) Küttner designed silver coffee sets and extensive sets of utensils, two of which, “Elegant” and “Arnika” are still being produced today. During that time, her artistic projects included many hollow copper forms and cast jewellery pieces. While teaching and researching amber at the State Art Institute, she also created art made of amber. The years from the late 1980s to the early 1990s make up Küttner’s enamel period, when she created jewellery, using free-form wire mesh and plique-à-jour enamelling and showcased the pieces in fashion shows. For the 1993 Baltic Fashion Fair (Balti Moemess), in addition to jewellery, Küttner also designed a nine-piece collection of garments. Since 1997, Küttner has been working on conceptual jewellery projects, such as “Dedicated to Edde Kurrel” (Pühendus Edde Kurrelile) and since the year 2000, she has created jewellery installations, featuring details of paintings by Paul Delvaux. Since 2010, Küttner has been rediscovering metal, mainly working with sheet iron. Küttner keeps returning to amber every now and then, as for her this is like “a holiday and receiving new ideas, perhaps from nature”.

Küttner has created amber-inspired jewellery for numerous exhibitions: International Amber Exhibition in Romania (1986), “Amber Art of late 20th century” in Ribniz-Damgarten in Germany (1999), Tallinn Applied Art Triennial (2000), “Amber Room“ in the basement hall of Tallinn Town Hall (2001), amber exhibition at the Estonian Museum of Natural History (2001), amber exhibition at Kuressaare Raegalerii (2001), “2+2=5“ at Adamson-Eric Museum (2009), Trofejas gallery in Berlin (2015), „Mere vaik“ dedicated to “Hõbevalge” by Lennart Meri at Vabaduse gallery in Tallinn (2018), „Mere vaik“ dedicated to Lennart Meri’s 90th anniversary at Evald Okas Museum in Haapsalu (2019). Küttner is a member of the Estonian Artists Association since 1974 and a member of the art collective Ruum 312 A since 1998. In 1998 she received the Kristjan Raud Art Award. In 2001 and in 2016 she was awarded the Ede Kurrel Prize.

The artist would like to thank Leonhard Lapin and Harry Liivrand. The exhibition is supported by the Estonian Cultural Endowment.

Exhibition in the Vault Urve Küttner